If anybody told me 5-12 years ago that I will product reconstructions of historical fabrics, I could call him a clown. But now it is like it goes. I am so much deep in this theme, I making new designs all the time (better say reconstructing 1000-year-old fabrics), I like the look of new fabrics when they first time come to my hands, I am fetishist maybe.

And I would like to make a short review about the fabrics which are already in stock and which will appear soon… or which are not in production yet but in plans. So at the very beginning I had an idea-fix – I have found several miniatures in Menologion of Byzantine Emperor Basil II where people (men and women) wore garments made of the same design. “If the painter draw this rather specific fabric 5 times in the same manner – he surely had it in mind, he saw it in his medieval reality!” – I told to myself. And started to find the way how to get this fabric. The only way appeared to be the was self-producting, ha-ha! But that was a splendid start.

Whole tunics with a “upside down heart”, hosen made of same fabric, modest decorative chest panels and hem trimmings… 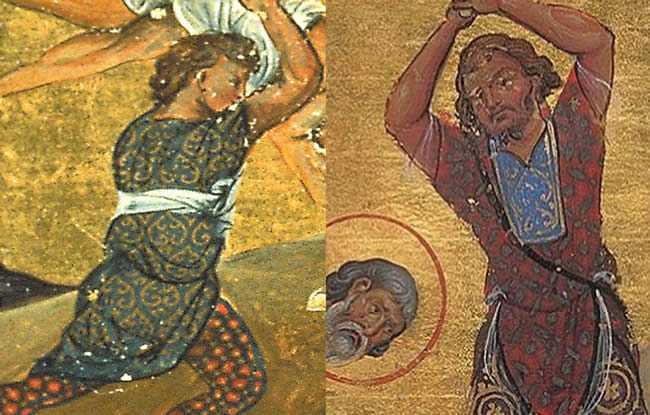 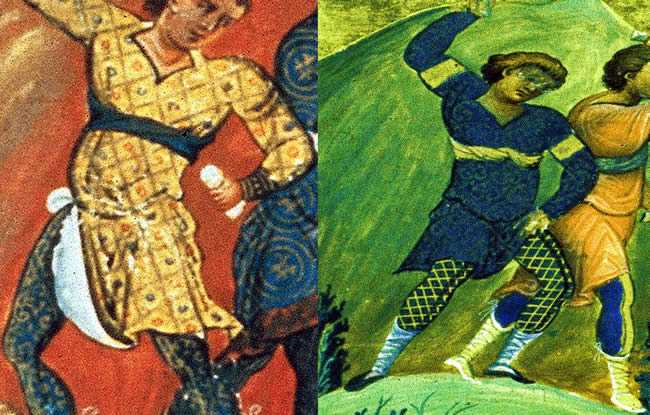 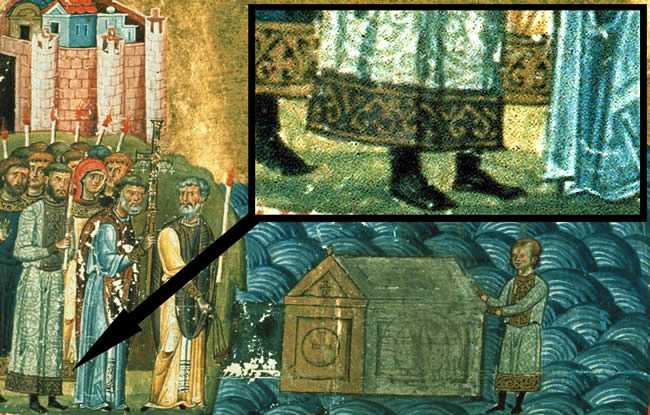 The result was staggering. This tunic will stay in my own private home museum untill my descendants will decide to sell the funny dress on their crazy grandfather, he-he. But I like long shirts not only because there was a lack of pipifax in 10th century. 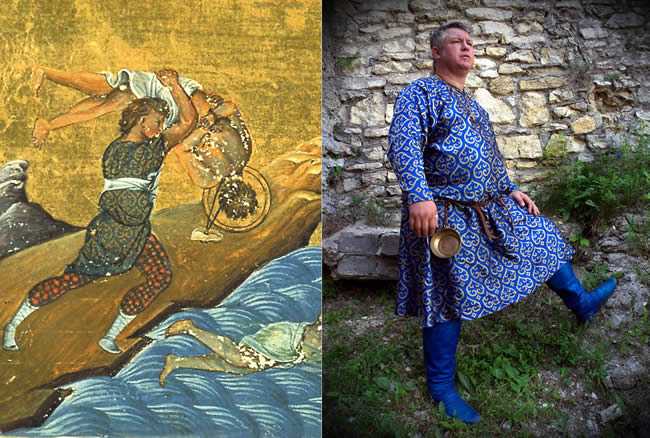 My next experiment was aimed at popularization of “not-medallion” patterns. I made a post on my FB page about wide using of lozenge / diamond textile designs. Again the Menologion as the single source of the Early Medieval epoch detailed so much and painted so colourfully was my example – I posted about 20 different miniatures where people have been wearing clothes like these:

I’ve got two sources, one of 10th and other of 8th century – first one from Alfred Bonno Museum (place of find unknown), next one from Ermitazh Museum (found in Moschevaya Balka).

You people are hard to turn off the used road. You still prefer round medallions, I am sure that is because of some early childhood trauma ^^ but nevermind, we all have much to correct in ourselves, even flawless me, haha! The rekonstruction of next 2 fabrics gave birth to several beautiful garments:

Next was the rekonstruction of textile from the famous burial Gnёzdovo. The part of Eastern coat with weaved dragon and the golden patterned band. The fabric was soooo perfect for various trimmings, panels, bandings and bindings that now I made the second set.

One of the best things came in the cloak stitched for a man from South of Nothern American continent. 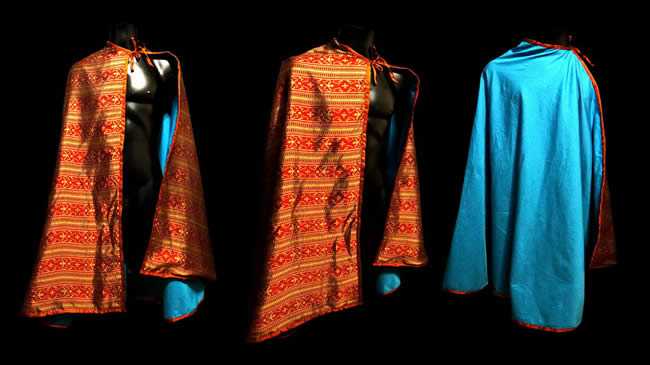 Next was the difficult project. Dalamatica of St.Ulrich gives false expression of being colored in brownish-red/yellow tints. But special literature which was also not easy to find says the garment was deep-violet with green and yellow and silver if I remember well.

This fabric got high media profiles. The pattern repeat is 10.5 cm + dilute tints – that was very convenient when making narrow trimmings and not “loud” garments. Some time later I will present the 21 cm medallion fabric.

Next was a specific, “tasty” project. The fabric has been attracting me for years. It’s kept in Ermitazh Museum in St.Petersburg same as several identical pieces in some museums around the world. 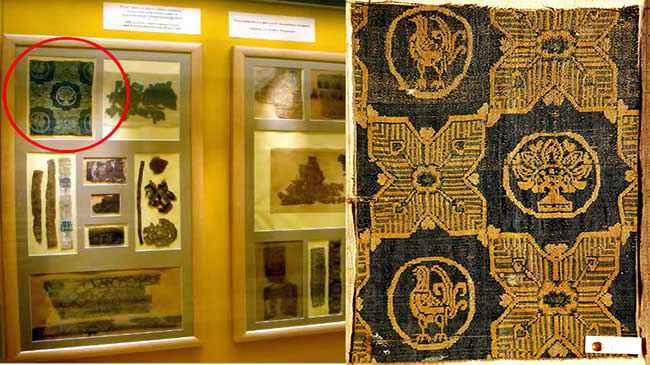 Fabric originates from Hasaut burial at Caucasus and was produced in Siria or Byzantium or Iran. I know how frightening and loathing this sounds for some reenactors who think that silk worms live in Swedish apples. But all silks untill the end of 11th – beginning of 12th century were produced in the East / Asia and imported to Caucasus, Khazaria, then Rus and then to Europe by coffles, fleets and various trading caravans. That is why I ween that location of find is not impostant for silk fabric as it was a thing for diplomatic presents, exchange, a trophy and a treasure itself which every brainy rascal pulled up to his house. Sorry for being obvious.

This is my beauty. 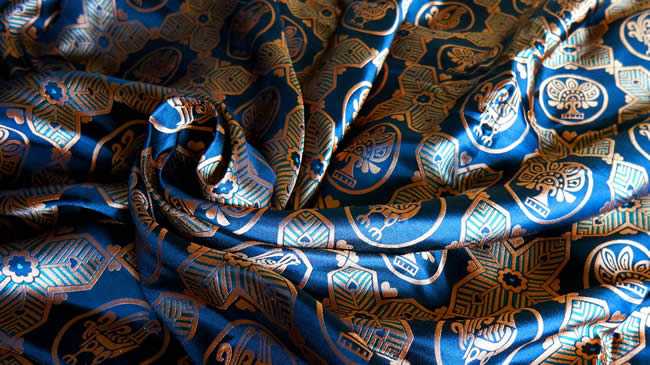 But this is not the best what I have for you dear boys and girls! Look at this! – this fabric was found under the altar stone of Saint Afra church in Brescia during the WW2. Dispite of 1000 years passed the fabric still have it’s tints colourful enough! Marvelous, right? 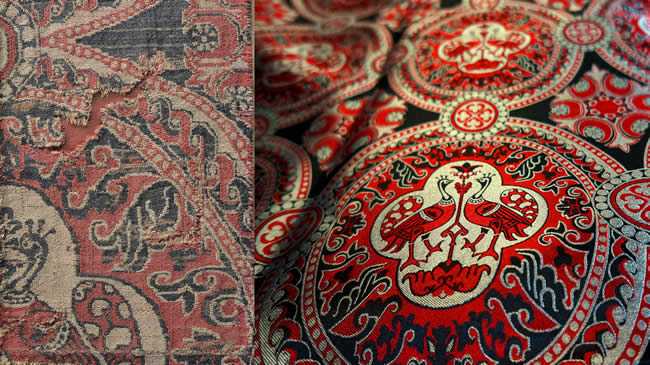 Next fabric was frightening me by it’s difficulty. On the one hand some textile fragments were lost and on the other hand the big quantity of runted details promised me some sleepless nights (I can’t make this work in daylight, nobody wanna work instead of me in the shop). This piece belonged to a “shroud of St. Amandus”, God knows better who he was. I simply admire of the connection of gold and reddish-pink colours in this tissue.

Frankly speaking this is all I have for now in stock but in a week the new fabric will appear, of a bit later period – 12th-13th century and the silk was found in the burial of Andrey Bogolubsky with several other textile remnants: 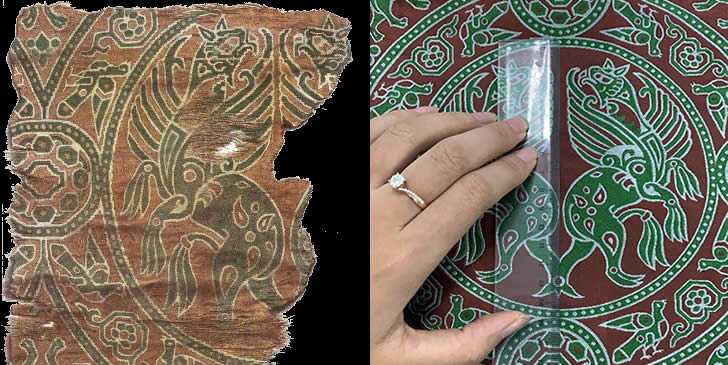 When I was 11 years old I was going basketball rather seriously and after that I don’t like short things – this story won’t be so short also, hehe. As the Biblical saying says: “Los hombres hacen planes, Dios se ríe”. But I still build plans, homo fearless. And the next fabrics which I am eager to reconstruct are… 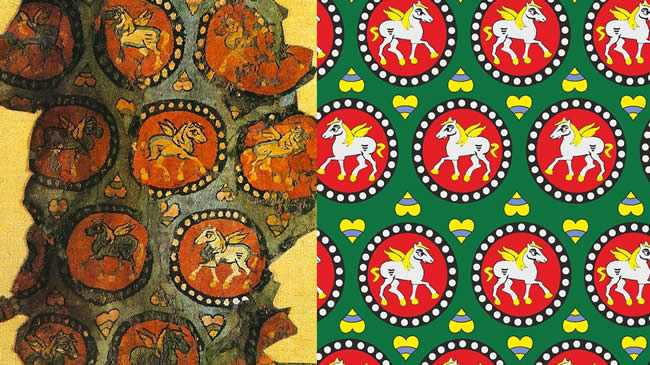 Silk from Antinopolis, Egypt, 7th century. Could I find enough customers for this historical period or not? Who knows? 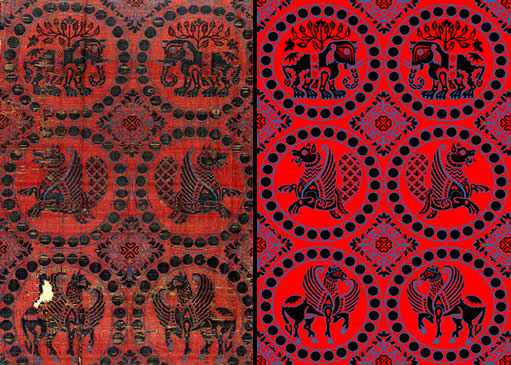 This fabric from treasury of Aachen monastery. 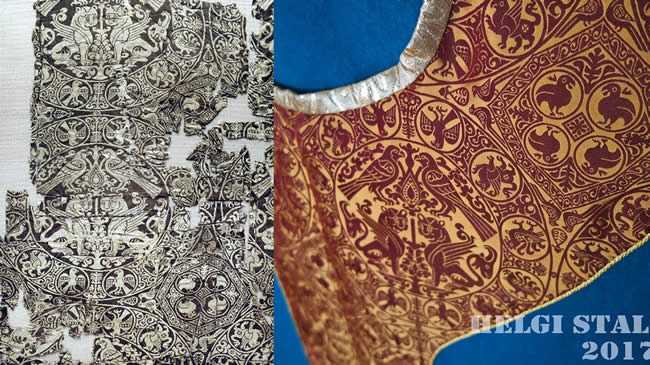 Once the Czech company Sartor has been produced the Iranian silk of 11th – 12th century. Since they sold everything I have only one garment left with such trimmings. And I believe many many people all around the Earth and neighbour planets miss this red-gold silk. It’s also in my plan, but let’s see what else I have in mind.

When I first found this picture in the album “Kunstgeschichte der Seidenweberei” by Otto von Falke and Julius Lessing – I was touched by these thin arabesques. Then I translated the German description and made the sketch in original colours (as close as my taste allowed). Silver threads on purple field – this will be astonishing for sure!

We are close to the end. This is reconstruction of the “Cloth from St.Gereon church” in Cologne. They say it was weaved there and not somewhere in China, Persia, Greece or Italy. Seems that for now this is the oldest patterned fabric made in Europe – and it’s from 11th century, closer to the end.

All I had to show you is here. If you like colourful silks same as I do – let’s keep contact! And several fabrics which excite my mind – as an addition. 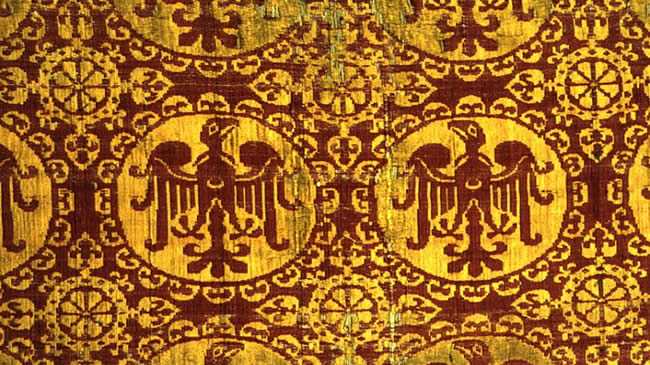 BUT THIS IS A STORY WHICH WILL HAPPEN SOMETIME.