Home/Column/Historical scale armour Vs. modern sentiments. A kind of article.

Historical scale armour Vs. modern sentiments. A kind of article.

The more I sell plate armours the more I have complains on that the leather laces tear off or were cut by blades and etc. Ok, sometimes we have had the unlucky leather procurements, shit happens. But mainly all is ok – some people simply don’t understand how a lamellar behaves.

a) Scale armours have different types/sorts/kinds and lamellar is just one of them. It’s characterictical features are: a) scales in horisontal raws overlap each other;  b) horisontal rows of tied-together scales hang separately on laces and move vertically (!). So some lamellars may be folded into a small pack;

c) Scales have holes and the laces going through them wear out / grind more or less often – so that’s why your lamellar needs attention all the time (+ taking care against rust). The only protection of laces which mankind invented is mounting the wide leather bands between rows – they hide hanging laces, protect them against the holes edges and weapon strikes; 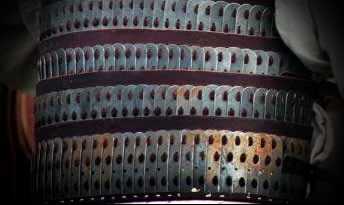 d) There are some misbeliefs about the hanging methods. First is that silk cords used in Japan / Chinese armours are everlasting. No. They simply do not rot. They will same way been worn out. Second is that row hide is much better than tanned leather. Maybe but it’s white/grey, it smells more and needs larger holes (about 4 mm instead of historical 2/3 mm). And the main problem – row hide must be always fat = soft.
So modern chrome tanned  leather is a good balance between price and result; 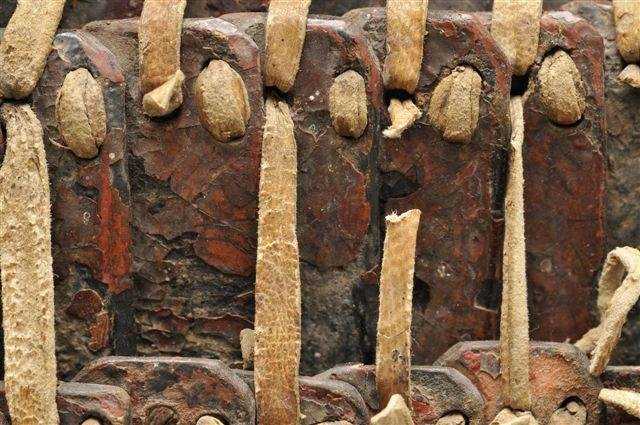 e) Lamellar armour was mainly used by cavalery. And it’s aim was mainly to protect against arrows. So the mounted warrior was sitting high and leather laces were not seen by attacking men. When the mounted soldier had to fight on ground the aim of the lamellar was to save his life in this fight / battle. So some laces could be cut, nevermind them, and even some scales could be lost – the man survived and could repair the armour untill the new battle.

Now we wanna come to camp after the fight, throw the armour off onto the grass, forget about it untill tomorrow, fight again in it, then pack and go home, then new event & etc. I know we are not people like this, we usually take much care about our armours but I also know such persons who think that the once bought armour will stay perpetual, hehe…

f) Lamellar looks cool when clean and shiny. We like lamellars. Scales move and reflect the sun beams, leather creaks a little. It protects good aspecially if worn on any kind of gambeson/bambakion. But this is not an easy thing. If you want something different – we have it. This is the armour with sew-on scales. 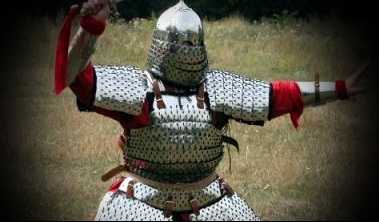 Many of reenactors play the “kievanrus” warriors but order mainly one armour based on scales from Shelstovica, Chernogov region, modern Ukraine. But the territory of Ancient Rus was extended, there are more remnants of attractive armours which are maybe not familiar to Western reenactors.

Same as weapons, scale armours were the items of “druzhina culture”. This means the armour was a trophy, the thing of exchange and import – you could find the similar scales on big distances one from each other. Let’s look at some examples.

Here are some finds of sew-on scales armours which could be used by infantry same as hanging lamellars despite of they are more rigid. 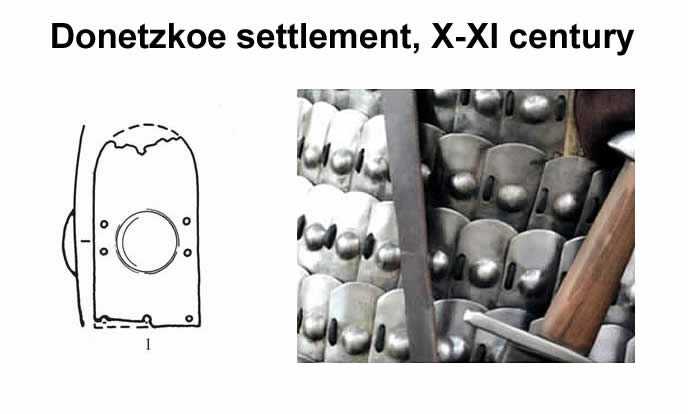 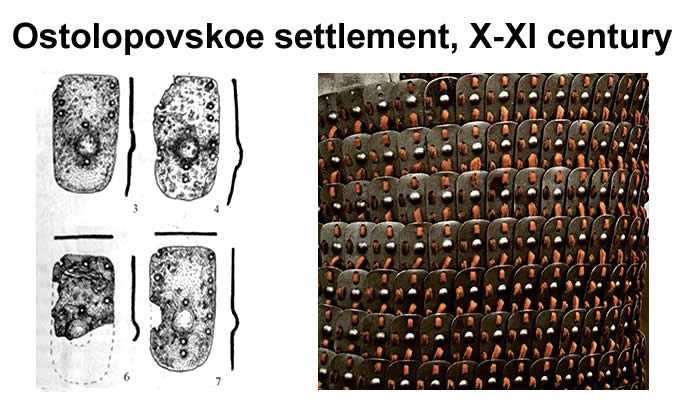 3. Famous Bek-Bike scales. It’s famous because the armour was found whole, not robbed or anyhow damaged. And we see how the very similar scales found on a wide territory from Kzakhstan to Western Rus show us the way where these armours came from to Rus and Europe. 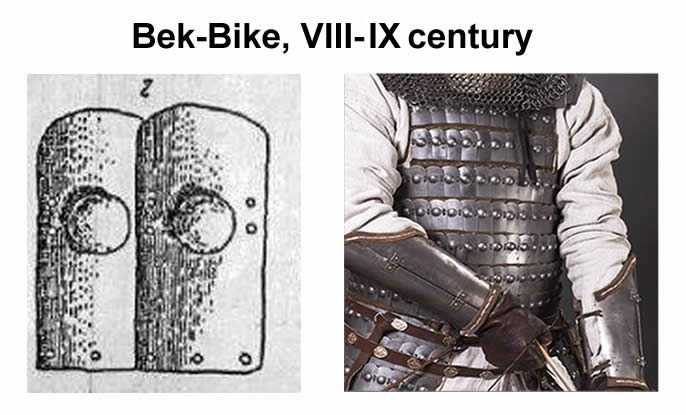 4. As an example – “later” scales of different shape. Byzantine miniatures of 10th century present us several armours looking very close to these scales so I think there has to be some connection.

5. Novgorod scales have 2 bosses. Not much, known are later scales with 3-4 bosses. But pay attention to that the stitches are hidden under the edge of neighbour scale. 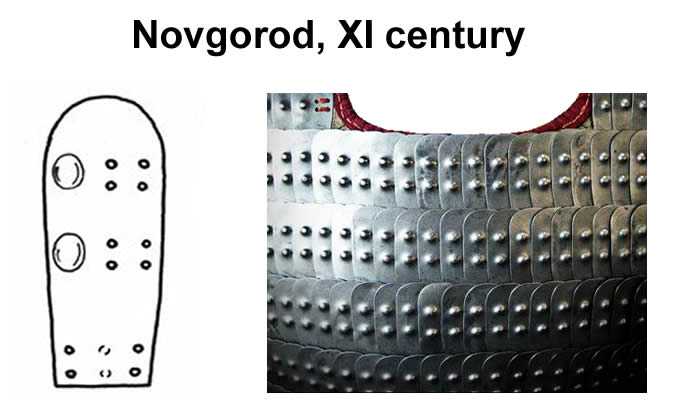 6. About 3 bosses – the famous armour from Sweden, the only source for Scandinavian warriors to use the scale armour for Viking Age (if anybody remember Visby armour with D-shaped scales – it’s from XIII century). But there are more different types of scales on Birka. They are not belonging to one armour for sure. And one scale is very interesting – the type F. 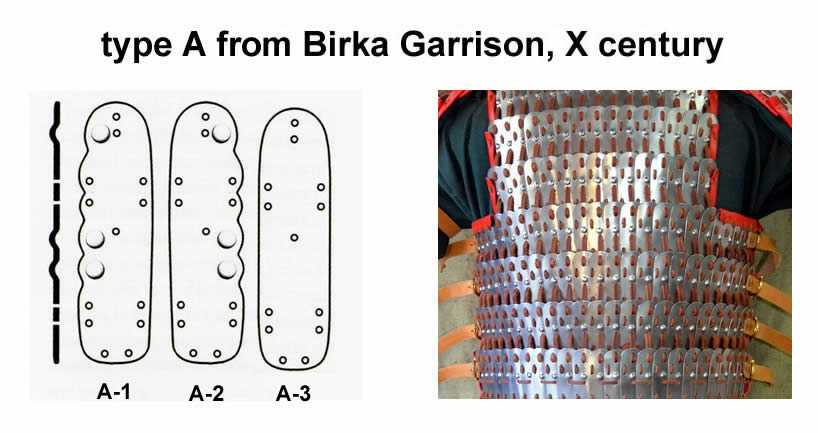 7. This is type F scale from Birka. Such scales may be sewn-on the whole leather or fabric base. Not on the leather bands, no handing rows for this armour. It’s not so flexible as lamellar but still gives enough place to bend over. And the origin of these scales goes…

8. …from Bulgaria / Byzantium. There are so many finds in different fortresses and nobody can say if these armours were Roman or local Bulgarian. But we have some quantity of depictions of same looking armours came from Byzantium / Georgia / Rus / Italy / Frankish Empire. 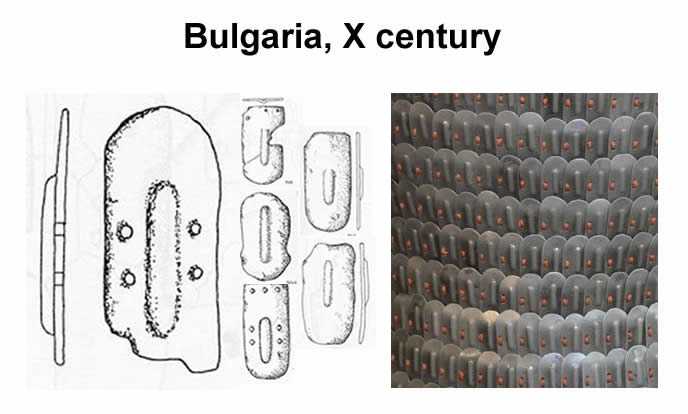 9. Just as an example from a bit later times, XI-XII century – the scales found in Great Palace in Constantinopol. They also have a boss going across the whole scale and I’d better call it “the ridge” 🙂  Apropos, these scales have a “brother” scale from Dorogobuzh (Rus, Smolensk region) – so the tradition lasted for some sizable period.

So I can summarize – sew-on scales are undeservingly forgotten by reenactors. We can make them easily. And before the final – several pictures from a rich pictural treasury of Byzantium, who influenced Rus and European culture, fashion and armoury for ages after the  Imperium Romanum Occidentale failed.