Hello brothers and sisters! I would start with an unusual and lonely sword, which has no analogues so far. A one-sided crossguard of a funny shape, the top is missing. Found in Romania. If you look through the photos below, it will become clear that for the reconstruction of this sword they borrowed a fairly standard top, known to local archeology from other finds (Garabonz). Valeri Yotov attributed this top to the Arab-Byzantine tradition and dated the sword to the 9th-10th centuries. 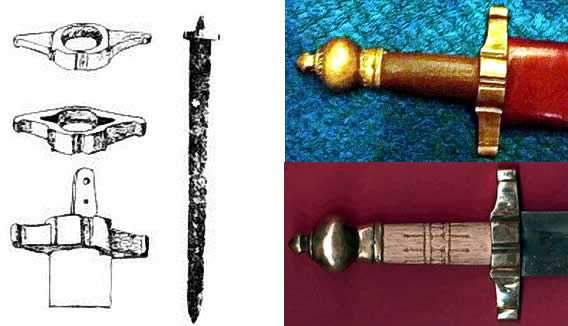 This type of handle is presented richly. Found in Garabonc-1 necropolis, burial #55 in Hungary. The typology of swords is characterized by the presence of a muff on the crossguard, which, based on its size, was worn at the mouth of the scabbard. The muff has a deep cut, which is surprisingly clearly seen in the Byzantine illustrative material. 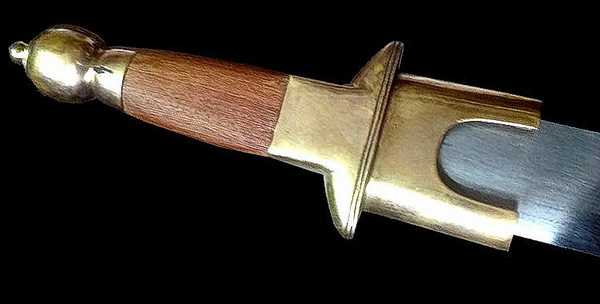 The following two swords are placed on the same illustration solely for the sake of saving space. And, pay attention – the mouth of the Persian sword is preserved well hiding under the muff. 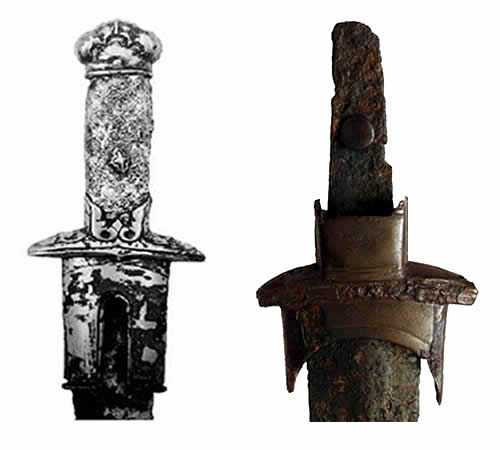 The silver mouth of the scabbard. This is unknown if they had same on other sheaths, but on some illustrations they are seen distinctly. 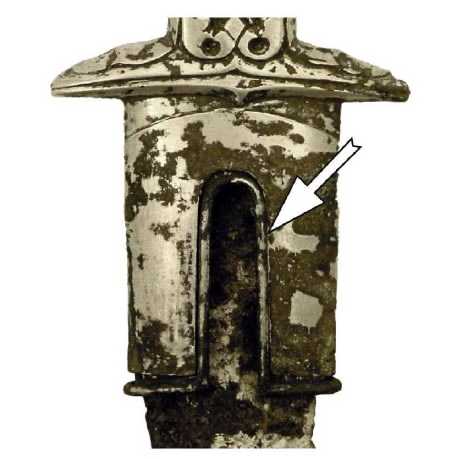 Finds from the territory of Ukraine appeared one after another literally during one year. 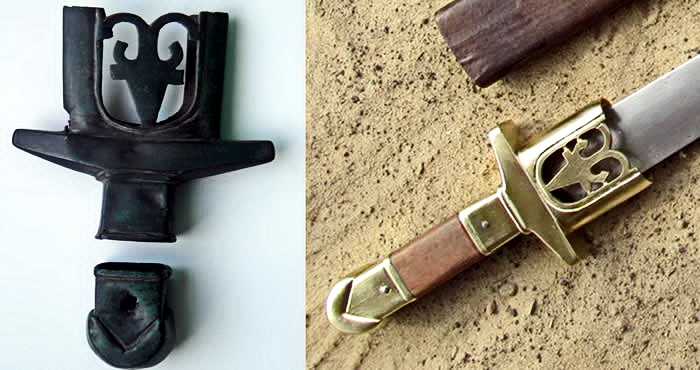 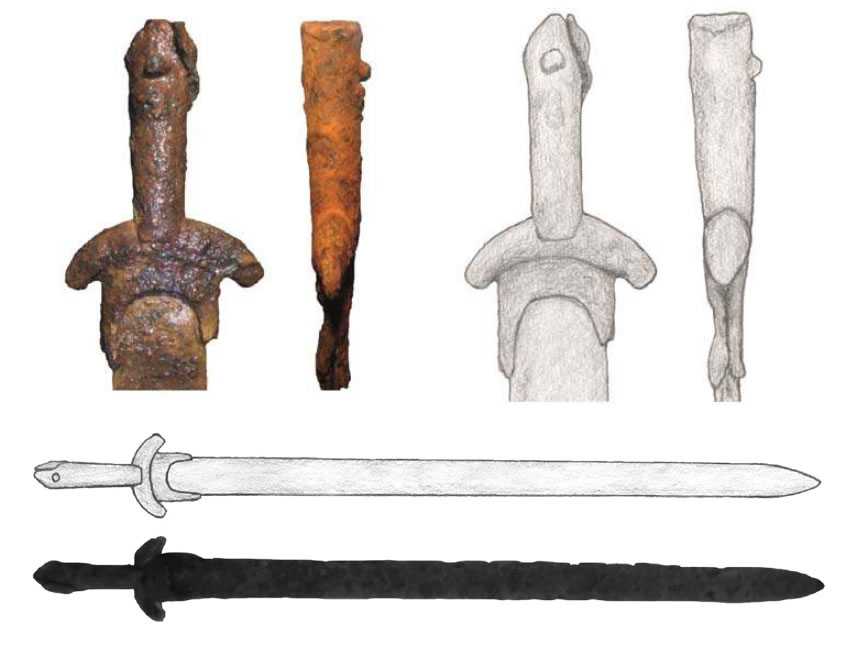 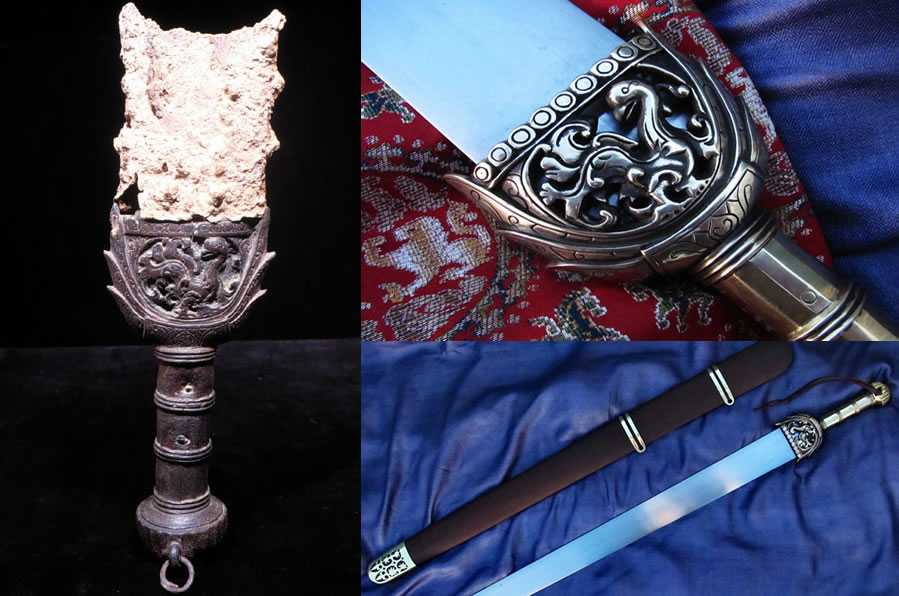 G.Baranov characterizes the crossguard of this type with developed “whiskers”, which he calls “the prop”, and a less developed muff:

“…a muff of flattened shape. Narrow prop up to a length of 130-150 mm. These crossguards should be dated to the XI century.» 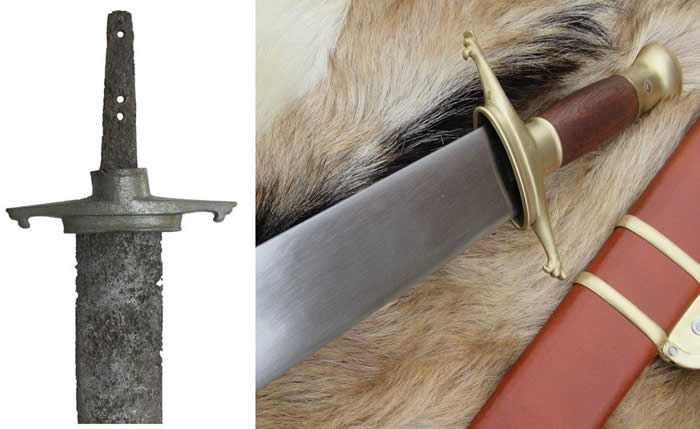 Galovo, X-XI century. Reconstruction of the crossguard and pommel made by Bulgarian historian M.Petrov.
The sword itself was assembled in Russia.

The next sword was found in Central Arabia was defined by an auction expert as Seljuk or Arab with broad dating X-XIV centuries, but the professor V.Yotov believes that it’s Byzantine and dates the sword to the X-XI century. The blade has 2 fullers, is very wide and also pay attention to proportion between blade of 65 cm long and the long hilt. 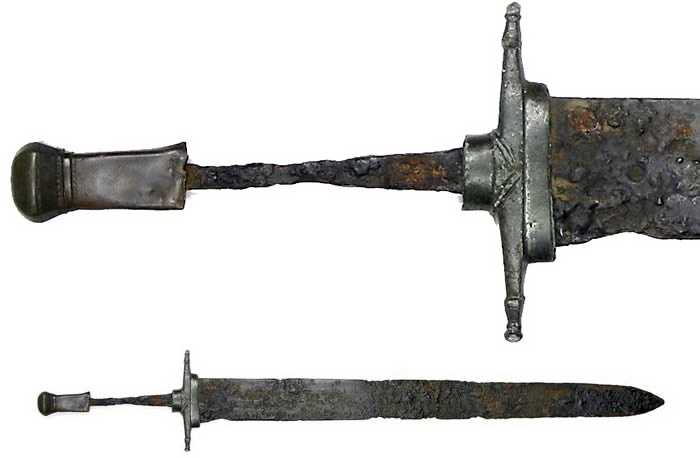 The identical crossguard with one broken-off “mustache” was found in Bulgaria. His current size is 123 mm, and the estimated length of the whole guard could be about 15 cm, and it’s just a lot!

The find from the North-Eastern Bulgaria.

In order to adapt the sword to foot fencing, another pommel is installed and the width of the blade is reduced. What for? You’ve probably already guessed that, sticking to all historical parameters, we will get a cavalry spatha, which is alien to the concept of balance at the microcrystalline level.

Reconstruction of M.Petrov. Assembled in Russia.

Another sword appeared on the Internet in January 2019 — a certain private collector Dr. Lee Jones decided to show a piece earned by continuous labor. The width of the blade is as much as 64 mm (!), and the crossguard is 12.9 cm wide. 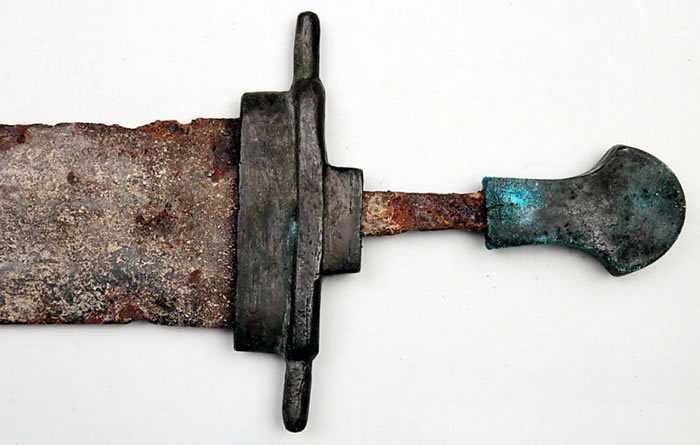 Poorly preserved one-bladed (!) sword from Serbia, which hilt’s type presumably can be attributed to the type of Galovo, but there is a suspicion that this is a broadsword (straight saber). We do not have better quality photos yet, but we are working on this.

Photo from the exhibition, which featured items of weapons from a private collection. A book will be published soon where all the items presented will be published. In the meantime, I want to pay attention to a sword type Galovo. 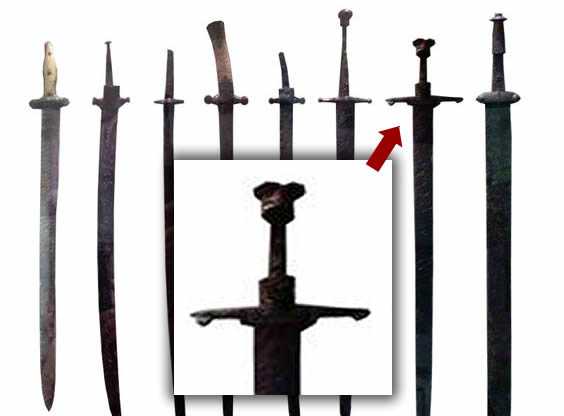 The sword that is very uncharacteristic for Magyar culture was found by archaeologists during excavations in the town of Kunágota, Hungary. On reflection, they decided to attribute it to the Byzantine military tradition. 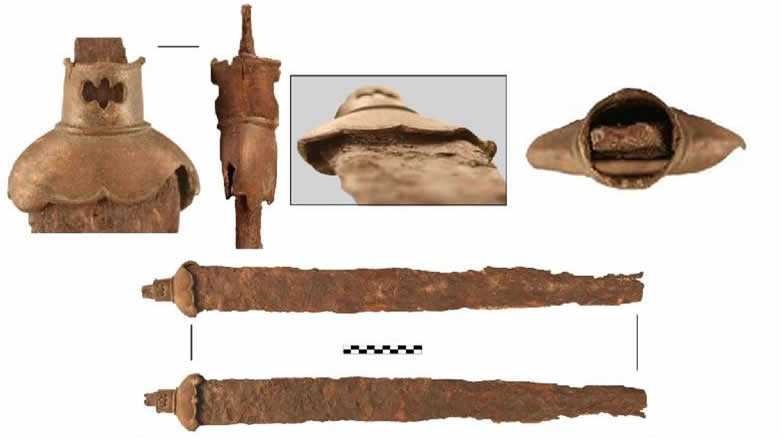 For example, some interesting Persian / Seljuk artifacts. Bronze matrices for the production of sword hilt and scabbard sets. 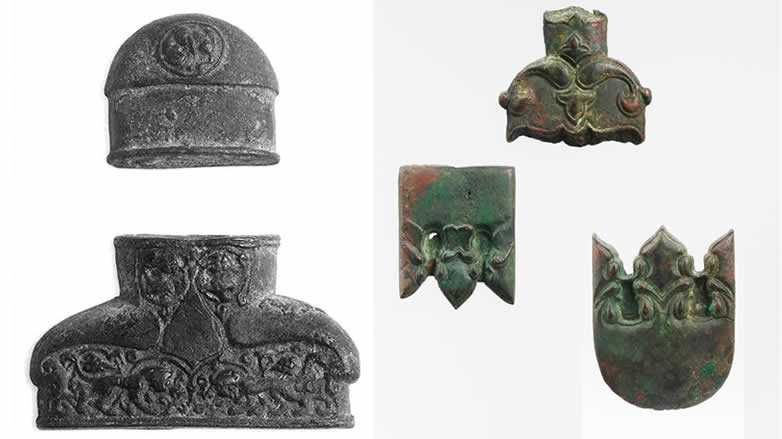 This type is called so, of course, because the excavations in the capital of the first Bulgarian Kingdom were carried out in 1948. Sleeve of the handle and the muff resemble the Garabonz type, although the muff has become squat and ascetic. The crossguard is soldered from two halves (modern production follows the same way, connecting two identical halves by soldering), the wall thickness is 1.2-2 mm.

A fragment of a crossguard from a Byzantine fortress on the island of Păcuiul lui Soare on the Danube. The preservation of the object does not allow to date it and carry out any serious scientific work. 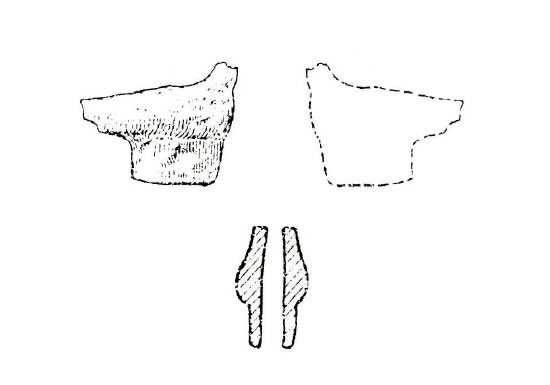 The cast set with the 122nd Surah from Koran comes from Egypt and David Nicol dates it to IX-X century A.D. This set gives us an idea of the possible appearance of the pommel for the “Pliska 1948” find. 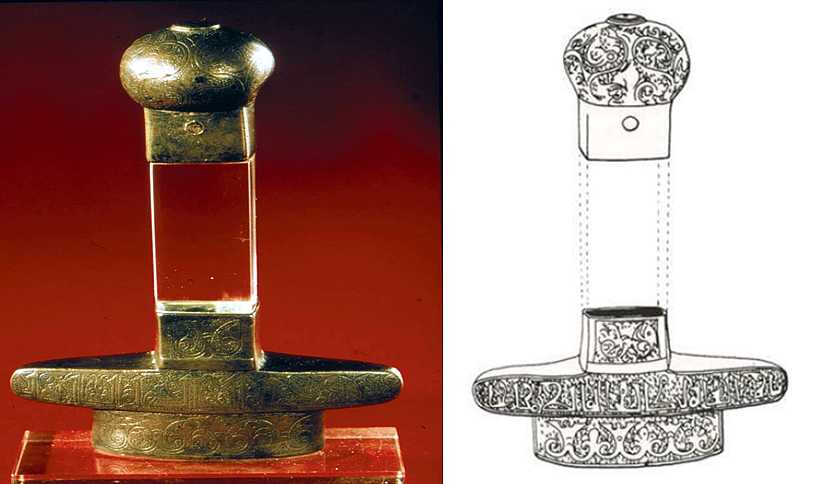 Auction lots and finds of black-diggers quietly enter the world of reconstruction. This is terrible and wrong? But until the issue is resolved, let’s draw the following typological analogies.

The first sword appeared on the Internet in 2019, flashed at auction and disappeared just 2 weeks later. Links that previously pointed to it do not work. The width of the crossguard is 9 cm, the total length of the sword is 89 cm.
On the second photo is the crossguard from black-diggers’ site-auction Violity. In this crossguard the simplicity of form intertwined with unpretentious decor – floral motif and “circle” ornament that fills the gaps. As for dating, I think there is no reason to exclude the X century. 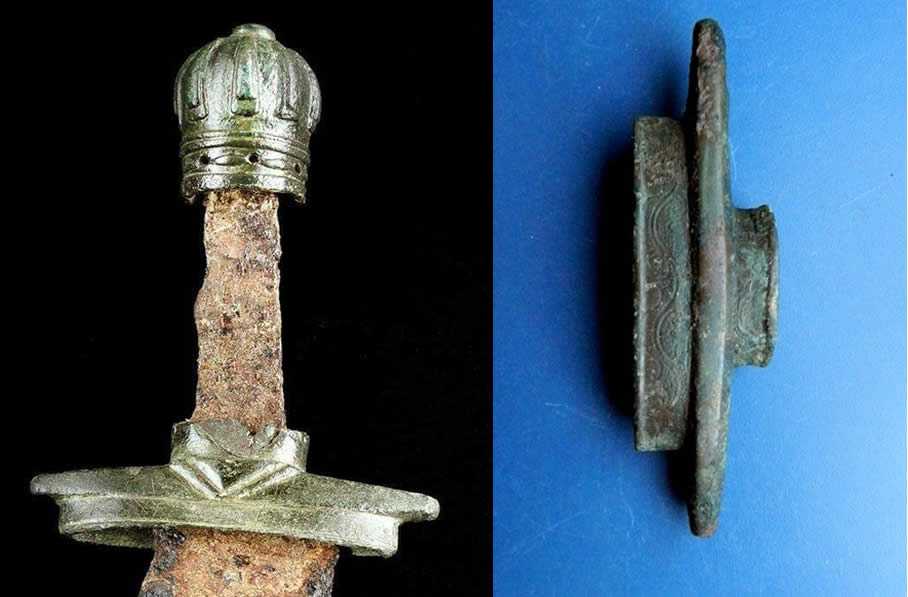 1 — sword from an Internet-auction; 2 — find from the Chernigov region.

For breadth of outlook and in general understanding of a situation take a look at 2 more guards, both late with dating XII-XIII century. But both, so to speak, “have hereditary traits.” Depending on the angle of view, they could be attributed to the type of “Galovo” (at least the second), but for now we will leave them here.

The crossguards of this type date from the end of X to the first half of the XI century. They also consist of two halves, the thickness of the metal is 1 – 1.3 mm. the crossguards have a height of 48 mm and a width of 75 mm in the widest place, the width at the base is 62 mm. As a person who held a copy in hands, I can say that no sheath will enter such a hole, provided that the thickness of the blade retains a statistically adequate thickness of about 5 mm. What role does the muff play here – is not very clear for me. Perhaps the muff was butt-to-scabbard or the scabbard had some special (metal?) mouth.

Chersonesus, dig of 1905. On the right — modern condition of the find, on the left — as found. 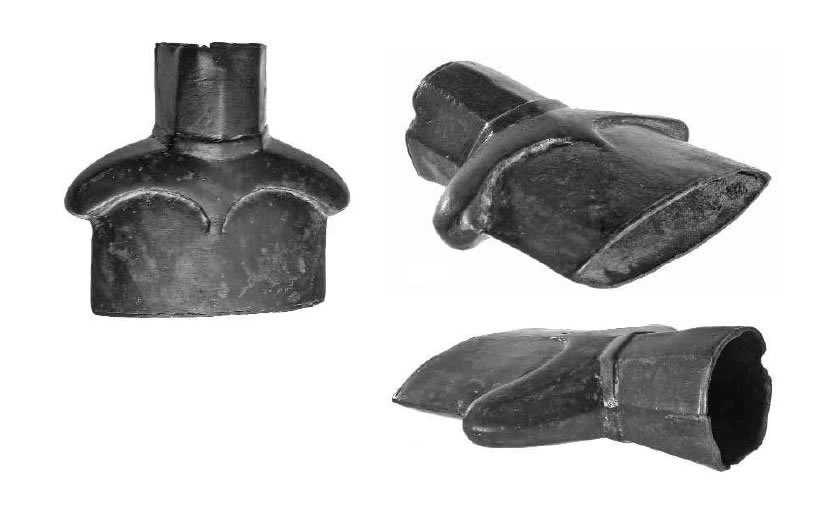 There is another crossguard, almost identical to the first two, but it was found 200 km from Medina, in Arabia, in the settlement of al-Rabadhi. It stands on the way of Darb Zubaydah pilgrims from Iraq to Mecca. David Nicolle, who published this crossguard, dates it to the VIII—IX centuries, but does not give a justification for such dating.

Indeed, the attempts of some colleagues to do reconstructions on the medieval artists’ illustrations are persistent. As a version, this is certainly fine-heavy round pommel, quite simple crossguard, but I would like, as always, to look at the analogues. And the most indecent thing is when such a reconstruction becomes a source for justifying other finds, as a source equal to archaeological arguments. 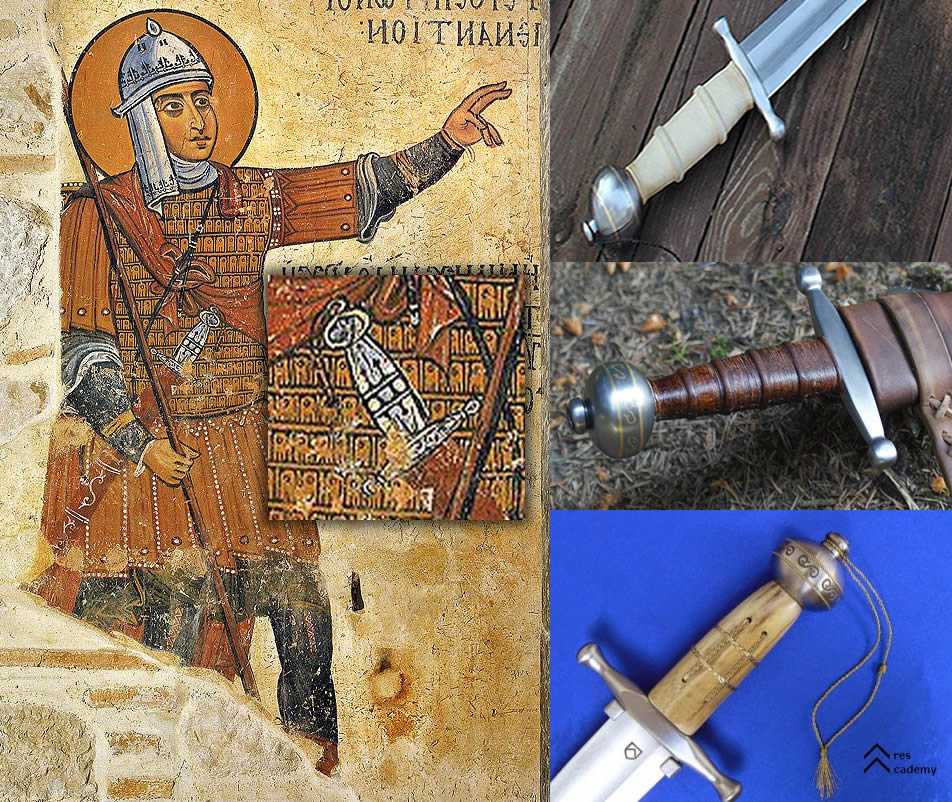 Single finds are also interesting. They cannot form their own typology, but Byzantine archaeology is very young and many things are possible ahead. 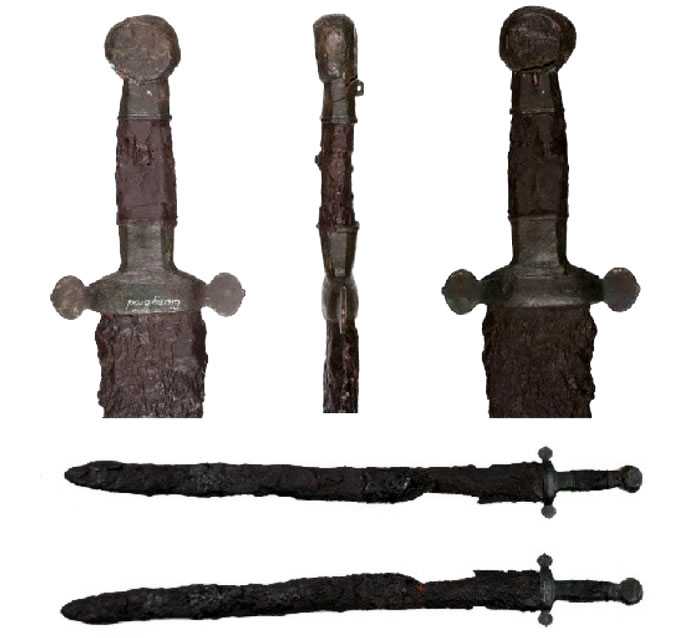 Not so long ago a perfectly preserved Byzantine (?) sword (?) with a crossguard was found in Poland, but without the pommel. My opinion is that the pommel is inverted, so it is so difficult to imagine a handle of such proportions that it goes into the muff. Rather, it is a muff that was worn at the mouth of the scabbard. 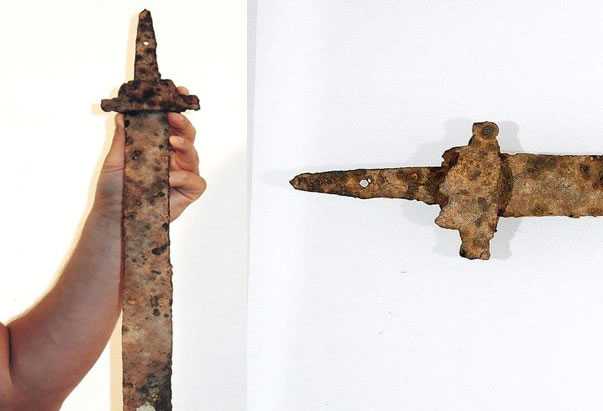 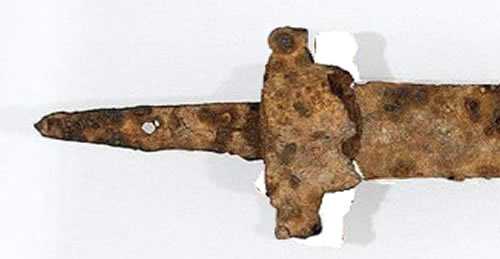 Perhaps a more correct arrangement of the guard.

P.S. It has already become known that it is not quite a sword, but a broadsword. It has a wedge shaped blade with a very long sharpened back side.

Sword from the national Museum of Georgia, the place of discovery – the mountain region of Khevsureti. Blade – “spatha” with a rounded tip, characteristic type for Byzantium and the Muslim world.

As well as the findings of Arab-Byzantine swords in Poland and Russia, and Carolingian swords/parts in Eastern Europe and further to the East, they do not allow to forget that the connection by the “route from the Varangians to the Greeks” had been functioning well. Here is the upper part of the pommel of the Carolingian sword. 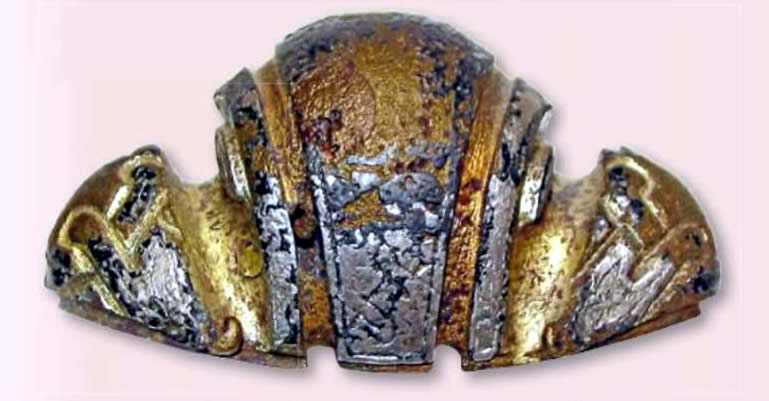 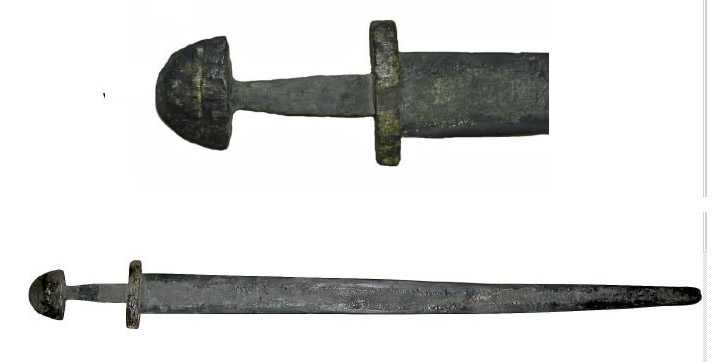 Sword from an auction, found ostensibly in Denmark. An interesting point – despite the fact that the hilt set is a typical European type O, the inlay and lenticular blade are not local. The blade is Byzantine, the style of decoration is also defined as Eastern. 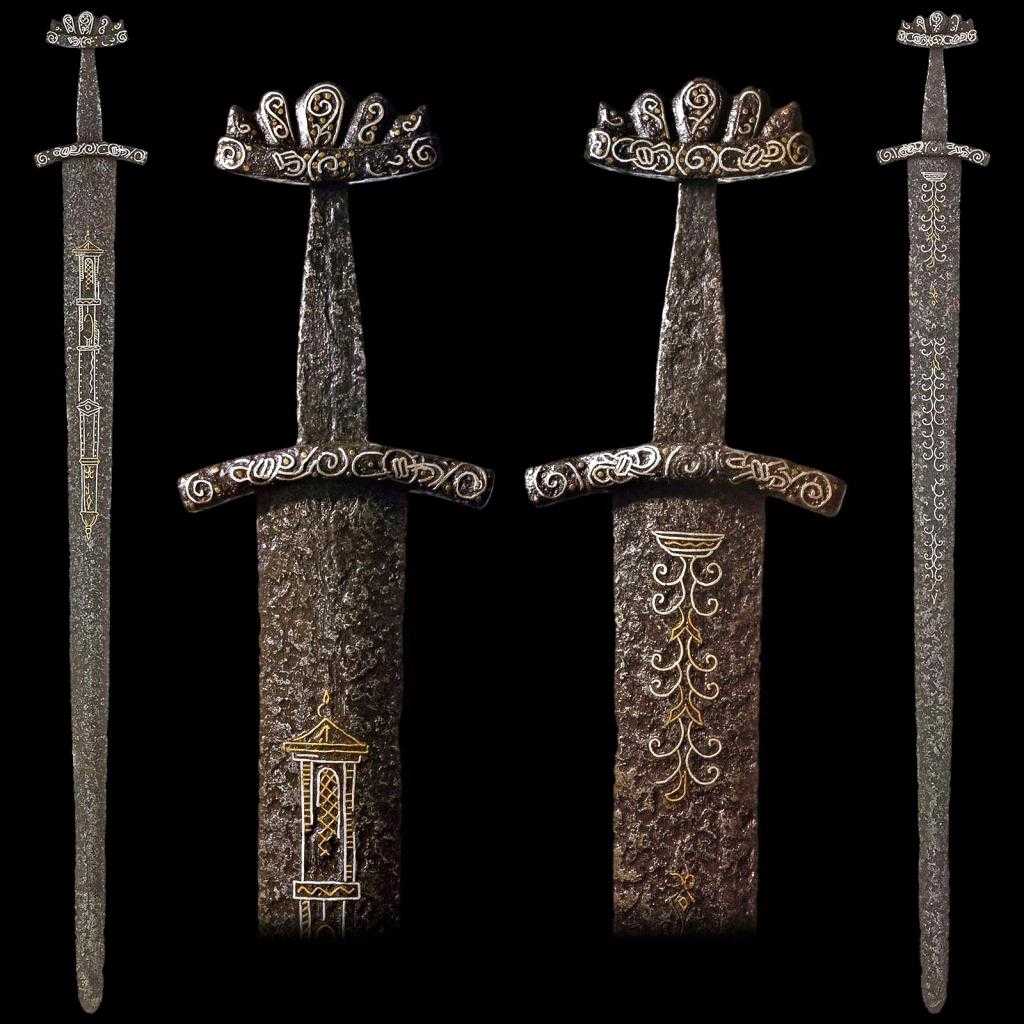 The upper part of the pommel. The place of the discovery is unknown, the storage place is a Museum in Varna. 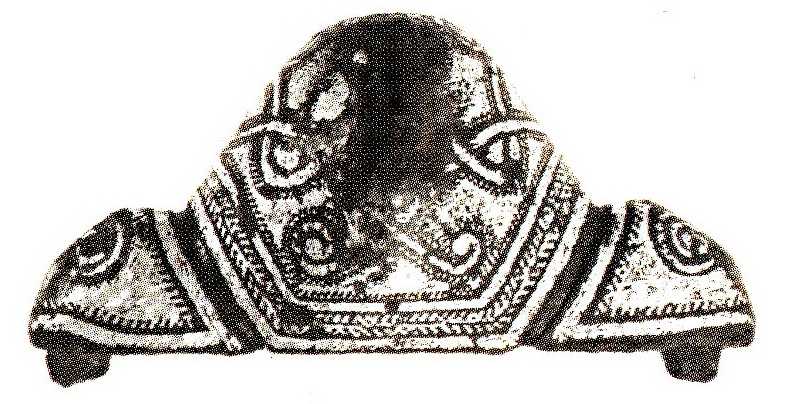 Х — beginning of the ХI века.

A typical East Romanesque crossguard on a Carolingian blade with a fuller, a Scandinavian find. 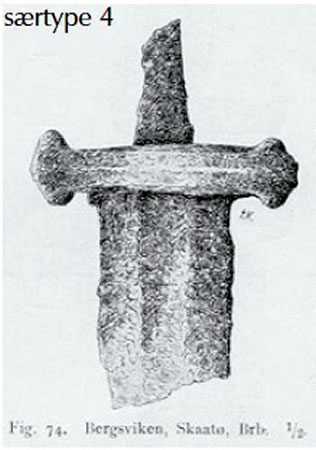 OLD INFORMATION: Eastern Romanesque crossguard of length 15.5 cm, pommel type H by Peterson is from the Scandinavian collection. Found in fortress Drastar in Bulgaria.
NEW INFORMATION: In short – although NOT a fake, it is a result of wrong interpretation of the facts, made by the museum restoration workers. The blade with the guard on it, plus handful of other iron/steel artifacts (including the triangular pommel) all of them found on a same place, have been bought by the museum from diggers*. During the restoration process, the restoration workers put the pommel on the sword mainly because “it looks cool that way”. All that has been done against the advice and will of Boyan Totev. As a result – this is not a hybrid sword, but a wrong mixture of two different objects – blade+guard / pommel.
Source: http://myarmoury.com/talk/viewtopic.35510.html

Drastar, Bulgaria. The end of the XI century. 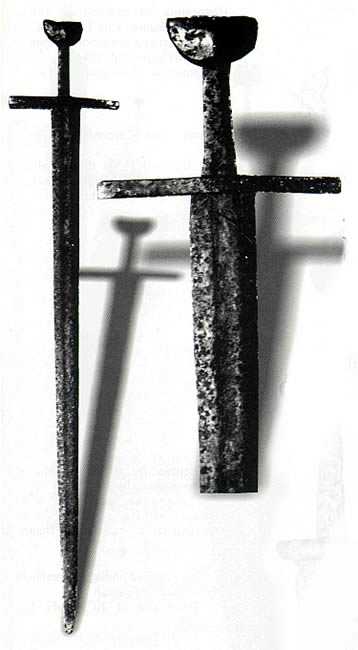 Type K (classification by J. Petersen). Dating: the end of X – first half of XI century, the fortress Opaka, Bulgaria. 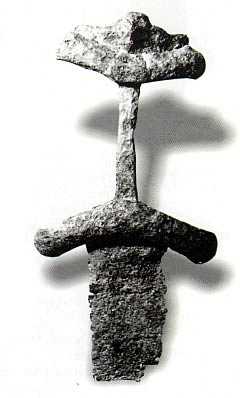 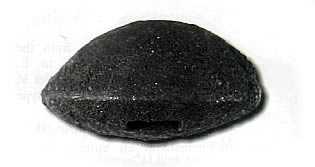 Another sword from the territory of Bulgaria, however, the origin of the find is unknown.

And the last example is a sword with a lentoid blade from distant Spain.

I should probably also represent the pommels found separately, and to finish at that. 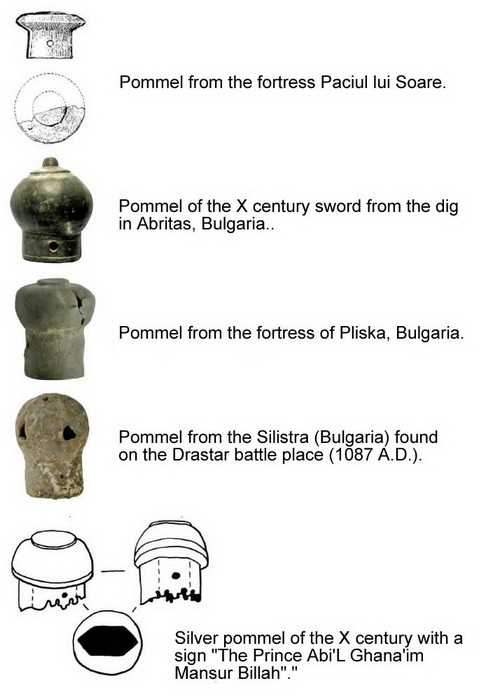 Thank you very much for your attention.

Yours Oleg Kozlenkov aka Helgi Stalingrad.

For a closer acquaintance with the topic — read this please:

Valeri Yotov, ” The find of Sfântu Gheorghe, Covasna County (1943): questions, which might be raised”. – Warriors, weapons, and harness from the 5th–10th centuriesin the Carpathian Basin. VOL. XXII. Cluj-Napoca, 2015.

Valeri Yotov. “The Kunágota sword-guard and 2 bronze matrices for sword-hilt manufacture from Iran”. – Avars, Bulgars and Magyars on the Middle and Lower Danube. София – Szeged 2011.