Skip to content
Home/Column/Omophorion or the Greek hood that nobody wears.

Omophorion or the Greek hood that nobody wears. 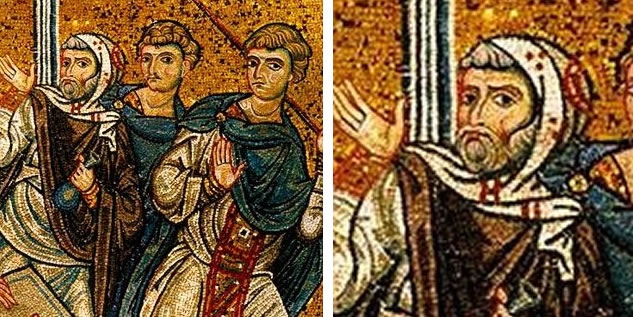 Liutprand Bishop of Cremona (as well as his father) mentioned certain “hoods”, which were worn by both women and the emperor in Byzantium and which, according to observations, were an everyday object for covering the head.

I assumed the name omophorion for such a hood (from the Greek ὠμοφόριον / μαφόριον — ‘worn on the shoulders’), despite that earlier this name was used only for a female head scarf (shawl / pall / amice). But the Orthodox Encyclopedia gave the following description:

[Omophorion] … originally referred to civilian everyday clothing, namely a scarf that was worn around the neck so that its 2 ends hung down in front or which covered the head. There is a known method of wearing when a wide ribbon covers the head, and the long ends of it cross in front, then behind and fall forward.

Later I found these headdresses in the vaults of the Metropolitan Museum of Art. Two long separate “tails” with serged edges run down from the head-shaped hood. In the second case, in the black’n’white picture, the omophorion consists of a three-gore cap with a hemmed “tail”. Moreover, it is assumed that the tail could be both double and single. There are generally some bold assumptions made along with the inability to find a monosyllabic meaningful name for this headdress — researchers use the term “extended cap”, i.e. “elongated / oblong cap”. I present my trial reconstruction of this headdress. In the photos, I gradually wrap the ends of the omophorion around my neck, forming a kind of pelerine, covering my neck from the sun’s rays and from the evening coolness. Despite the Covid, this item was tested by me at 4 festivals throughout the 2020 season. This is a very convenient and practical thing. The materials I used were coarse silk and woolen ribbons reconstructed after the find. Many items remained in use from the most ancient centuries to the present days because of their convenience and elementary essence. The omophorion remained, of course, in the church culture — like many items of the Byzantine wardrobe but in modified forms.

And in civil life, we probably got a bashlyk  — the Cossack one on the left, the Abkhazian one on the right.
Although, I would swap them out because Cossacks got it to their equpment after the Caucasian war of 1817-1864. P.S. Apparently, it is necessary to distinguish the omophorion (or the omophore sortly) as a hood with free ends from a hood with a cape. The latter may have had the name stetokarakala, mentioned in the “Book of Ceremonies” and explained in a footnote as a “hood-like” collar / collar / breastplate / gorget.